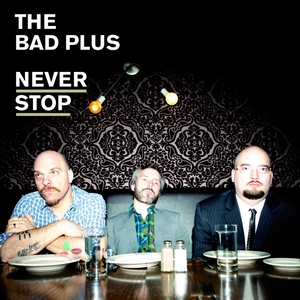 I just received The Bad Plus’ last album, one of my favorite band ever.

In this album you just have original compositions, which is a first compare to all their past albums, with many covers.

I just really like four songs in this album, and I found the others a little bit boring.

I really like this low piano in My Friend Metatron, the groovy rythm of Super America and the crazy build-up of The Radio Tower has a Beating Heart.

Berry Loves To Dance is my favorite song on the album.

I can’t wait for see them live.

These are the Vistas

My friend Mainro had a musical project in Valenciennes’s University, where I studied. With his band, they decided to do a cover of Aphex Twin’s Flim, and that’s why Mainro made me discover The Bad Plus Flim Cover.
“These are the Vistas” is in my opinion a major album in music history.
It’s a virtuoso trio :  Bass, Drum and Piano, who play a music between Jazz and Progressive Rock. They are very famous for the following covers : Flim, Smell Like Teen Spirit, Heart of Glass…
But it’s more for their original compositions (mainly composed by Reid Anderson, the Bassist)  that I love them and precisely Big Eater.

Their music is complex and dissonant, but pretty much composed which let you easily remind the piano riffs.
I love too the 1972 Bronze Medalist song and its drum solo at 4:50.
They record their music in one shot, no overdub, that’s rare nowadays.
I heard that The Bad Plus was one of the last Jazz band who still sells CDs and signs on Major Labels, and it’s easy to understand it : They really brought a new view on this music with many talents.