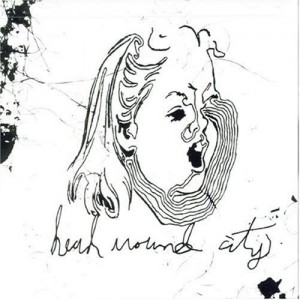 Head Wound City is a superband with Justin Pearson (Basse) and Gabe Serbian (Drum) from The Locust, Jordan Billie (Vocals) and Cody Votolato (Guitar)  from The Blood Brothers and finally Nick Zinner (Lead Guitar) from Yeah Yeah Yeahs, who released this self-titled album.

Only knowing this member list will tease you, but adding to this they did what was impossible : creating a 7 tracks, with a total length under 10 minuts, totaly new, original and essential.

So, It’s a kind of Noise / Rock / Hardcore totally spathic.

Jordan’s vocals are terrific (like in I’m A Taxidermist, I’ll Stuff Everything)

I love the spathic and crazy rhythms that Gabe plays (as ever ha ha) and particullary in New Soak For An Empty Pocket and Trash Zoo.

To conclude : Another Must Have and I hope they will release something else (like I said in many of my reviews haha)