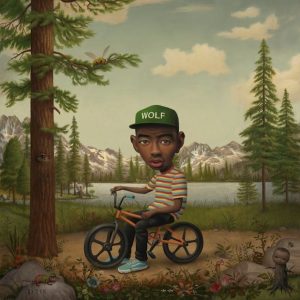 Third album by Tyler The Creator and still a good surprize.

From the very first song you’ll recognize directly Tyler’s signature voice, and his taste for provocations.

You still have these weird productions and synthesizers that I love a lot like in Jamba.

Cowboy and Rusty are two terrific tracks on that album, slower but with a cinematic touch, bravo !

I love his flow’s speed in Domo23 (and when he says “No no too soon”) and its funny videoclip http://www.youtube.com/watch?v=o4OD3IHs5jU

The production, vocals and flows in Tamale are very original and great.

The Deluxe box is beautiful, with many goodies and an amazing artwork ! There is a drawing on the disc itself which is the same as the one on Goblin‘s disc, except that one is smiling when the previous one had a sad face, haha.

Second album by Tyler The Creator.

I’m absolutely amazed by the fact that he brought a music with experimental productions, and dark, raw lyrics to a popular level.

Tyler is young and very talented, to be convinced, just give a try to his first song Goblin and the way he paints the scene.

My favorite song on that album is Radicals !

You have to see Yonkers‘ videoclip, terrific : http://www.youtube.com/watch?v=XSbZidsgMfw

I love the production and all the synthesizers in Sandwitches.

The romantic song Her is cool and amusing regarding the songs around that one. That song is in his cinematic-songs line.

I bought the collector version with a second disc with three tracks, and I love Burger and its synthesizers.

I discovered Tyler the Creator with the terrific Bastard.

I mean “This is what the devil plays before he goes to sleep
Some food for thought, this food for death, go ahead and fucking eat
My father’s dead, well I don’t know, we’ll never fucking meet” : This is Genius’ work.

I love the piano and that therapy concept in the album.

Then comes Seven with a great production and flow.

I love the production too in Parade which seems coming from Anticon Records.

Slow It Down and French! have great productions toom and the part at 1:23 in Slow It Down is a killer.

I hope they’ll print that record one day on physical.

For more reviews in that genre:
https://radiatorhymn.com/category/hiphop-en/