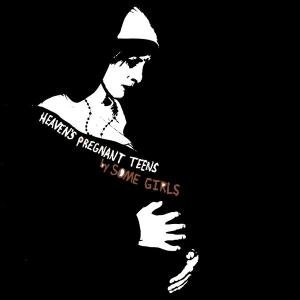 The final album from the band, “Heaven’s Pregnant Teens” is probably the most homogeneous and constructed album of their discography. The production is well done, better even than their last EP “DNA will have its way” which was very good then. The “brut” punk vein that defined their early years is combined with weird and interesting bass sounds from Justin Pearson (bassist of The Locust), and crazy soundscapes in the guitar parts (Marry Mortuary Song). These guitar soundscapes would later resonate in All Leather’s music.

Wes’ vocals are pretty intense, as are Justin’s backup vocals. More so than in the old records there is a huge focus on flow and rythm.
The artwork is interesting and provocative as always. There is a second version of the cover inside the box with their second drummer dressed as a nun smoking a cigarette. Funny!
Gabe play an amazing drum solo on Deathface, my favorite song on “Heaven’s Pregnant Teens”.

The lyrics are well-written and comical. I really like this extract from Retard and Feathered :

and this one from Warm Milk :

Don’t blueprint me you casket designers
You’re not dead like me, you little lip-liners

It’s pretty hard for me to just keep 5 top songs on this album, which I love for its coherence and totality.

I saw Some Girls in Antwerpen, Belgium, on the 21st of April,2006 at Scheld’Apen with Colia. The place was totally lost in the industrial area, in an alternative venue, a kind of squat. There was a weird ambiance in that dark place. We were just two, far from home. The concert hall had two rooms, one with the bar and the merchandising area, the second with the stage and access to the vegan kitchen, of course. I remember spending a lot of time at the merch’ area because there were a lot of CD’s from Justin Pearson’s 31G label. It was hard for me to find these CD’s at that time since it was before i could buy them online. That night I bought albums by das Oath, Give up the Ghost and the Malkovich one. At the bar, I stood next to Justin, the bass player. It was the first time I’d seen him, but I didn’t speak to him because I was so shy and had always been impressed by his music.

The first band, Malkovich, was half “rock’n’roll” half Hardcore, and pretty fun. Then Some girls set up all their equipment, and I saw for the first time their very impressive pedalboard. They did their check-line, but were slow to start because of a weird and powerful bass noise from the speakers. After the issue was fixed, the concert started. It was very intense and visceral. The climax was the song Deathface – a true performance that included a looped rythm and guitar riff that lasted fifteen minutes. The volume was very loud and reached you physically. Wesley Eisold’s impressive vocal performance had a haunted air to it. After those first surprising minutes, people thought they’d seen the max, but the power increased even more when the five members sang the last lyrics “Who will fuck when the people are gone ?” and they screamed in loop “Ape” for five infinite minutes. I remember their tortured faces and the drool that flew from their mouths to the mics. Everytime I listen to that song, I am directly reminded of that moment, alone and far from the world around me.