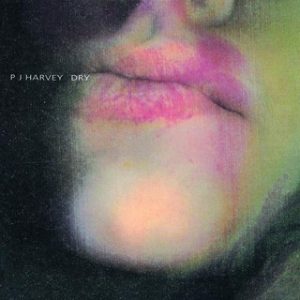 That PJ Harvey’s first album hits me at the first listening with that “direct” and raw sound, based on a simple rock structure (bass, guitar and drum) and with the singing in the front of the mix.

Oh My Lover, as a starter will take your guts out with her gritty lyrics (!). At the same time heavy and moving, I love her raw guitar’s parts and her scorched vocals.

I love Dress and its double bass tempo with a voice which starts low and ends really high, she covers a wide range !

Sheela-Na-Gig surprizes with that little voice at the beginning, soon covered by that thick and groovy sound (allusions to some unsane cities in England ?)

Joe is bold and powerful with all the feedbacks at 1’10” and an efficient break. I love the drum parts in the Finale.

Plants And Rags is a terrific song with a beautiful acoustic in the couple violin/guitar.

Here is a great live video in london for Sheela-Na-Gig in 1993 : http://www.youtube.com/watch?v=7IcdJJsI7ck

She released many other great LPs after, but that one remains my favorite because of its raw and wild touch with catchy riffs.
A great record.