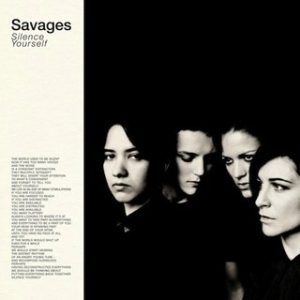 There comes “Silence Yourself” and the sound is amazing !

You’ll have a slap in your face with Shut Up and its unsane bass sound.

I choose Husbands again as my favorite song, like in the previous review, that song is a killer !

Strife‘s weird chorus (with that crazy fuzz effect) and its groovy bass line are interesting.

She Will sounds almost hardcore in the guitar’s riffs and because of these instantly-stopped cymbals. Terrific !

I love that fast tempo and agressivity in Hit Me.

That first album is a success !

Added to a crazy punk energy on stage, I really loved the way that these fast and powerful bass guitar riffs were played !

Another side I loved and discovered more on the records (because during the live I was on the bass guitar side) is the noisy ambiences created by the guitar player.

I loved too the way that the cymbals were continuously hit, and stopped. I may have loved something more brutal on the snare as well, but this is probably my grindcore side speaking.

To conclude : an amazing performance.

Let’s talk more on that 4 tracks live album with an amazing artwork as well (as for the front picture, as for the live-photos-mosaic on the back)

The ones who read me often know how I dislike live records, but on that one, the side with I Am Here and Husbands is well recorded and kicks ass.

I Am Here is a superb build-up, I love the guitar effects at 4:37 and the way the ride cymbal sounds makes me think of Amon Tobin ha ha.

I love the vocal performance on City’s Full.

A great Live Ep and the girls are leaving now for their North-american tour : Good luck Savages !

Savages is an amazing rock/punk “all-female” quatuor that Rachael discovered couple months ago.

Anyway, I bought that 7″ on their merch stand and I was amazed by that artwork.

To know how it sounds, let’s have a look to this amazing live video of Husbands : http://www.youtube.com/watch?v=6y-cVzbBBQ8

That song makes me think of Plaster Casts Of Everything, by Liars, but with a terrific vocal performance.

I did love Flying To Berlin during the live in Paris, but unfortunately I think I don’t feel the same energy in that studio version.

A very promising Ep, I can’t wait for their album to be released !