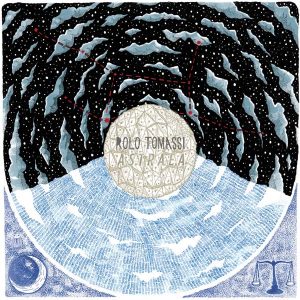 I really enjoy how each album by Rolo Tomassi starts, with that weird keyboard intro and then a powerful and complex hardcore part few minutes later. They are back with a sound better than the previous releases. Huge part at 3:37 à la Everytime I Die in Howl.

My favorite song on that album is The Scale Of Balance because there is so many great ideas in the melodies, as for the rhythmic patterns, sometimes à la Daughters at 2:06 and another terrific part at 2:36. Bravo !

The taping parts in Remancer are crazy, very interesting technically-wise.

I love the part at 2:16 in Gloam and how the guitar parts are mixed with the drum.

The artwork is still a success.

We finally opened for them the 4th of August @ Le Batofar in Paris, and you will enjoy see this album live with all the layering and that powerful vocal duo !

“Eternal Youth” is a compilation on 2 CDs, from their many Eps.

I love the “western spaghetti” ‘s riff in Titanomachia and Pillbox ‘s violence (Where Eva’s vocals make me think of Caliban’s singer voice).

The crazy experimental Finale in Apocalypso is absolutely amazing !

I love the Locust vibe (“The Flight Of The Wounded Locust” album) in Seagull.

The soundscapes in The Tentatively Named “Film Noir” are interesting.

The electro songs are great.

Here is a second album by Rolo Tomassi.

You’ll recongnize their style in the two first songs Katzenklavier and Agamemnon : A success, so Rolo Tomassi-an. Do love the part at 0:59 in Agamemnon.

It seems to me that the guitar effect in House House Casanova is produced by the lovely Death By Audio Robot pedal and I love it. I like the mosh part at 0:37 as well.

My favorite song on that album is Party Wounds and here is the music video : http://www.youtube.com/watch?v=eoOzpM-yPUA. The riffs in that song are powerful.

I love a lot the mix between guitar and synth in the terrific Unromance (Huge part at 2:23).

Tongue-In-Chic has a Converge vibe, delightful 🙂

Rolo Tomassi is an english mathcore band since 2005.

You’ll notify the great vocal performances by Eva Spence and her brother James.

I do appreciate the great skills of ther guitar/bass/drum trio who deliver complex and intense riffs.

Let’s start with the great I Love Turbulence : great intro (that is a key point in Rolo Tomassi with these ghost synths and then powerful and complex mathcore riffs).

The part at 1:17 in Nine is a killer ! I remember an early Children of Bodom song.

I love the ambiences and the part at 2:15 in Macabre Charade, excellent !

I enjoy Fofteen, song in a The Locust vibe, terrific part at 2:01.

The artwork is beautiful, it makes me think of a the artwork on Mutiny On the Bounty’s release few years after.