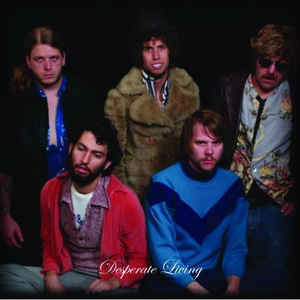 Artwork of the year. yep.

Here is Horse The Band’s last album with a terrific song.

We’ve been lucky with H.O.Z. to open for them in Lille the 9th of May 2009 at la MJC St André, just after they finished recording that album.

Horse The Band are cool and give everything on stage : everything. Nathan feels comfortable singing anywhere, even laying down on the floor a complete song haha.

It starts loud Cloudwalker with these synth/guitar parts that follow each other and I love the break at 0:50 : so Horse-the-band-ian.

In Science Police as well, I love the harmonies work (huge part at 1:38).

When Nathan screams “Mexico City” in Big Business it reminds me of that joke he did, announcing they just landed from Mexico City, during the swine flu and then he coughed.

The solo part at 1:37 in The Failure Of All Things makes me think of my Game Gear years.

I have to admit that Horse The Band has done a much better job with their Murder, that H.O.Z.’s version on Monkey Banana haha. The intro riff sticks in mind and the part at 1:28 is a killer.

I love the part at 0:42 in Face Of Bear (I love the Nile’s touch in the guitar parts)

Kangarooster Meadows is a funny song.

My favorite song is  I Think We Are Both Suffering From The Same Crushing Metaphysical Crisis. I love the composition and layering work, the intro, the parts at 0:49 and at 1:08. They are epic’s kings, Bravo !

The part at 2:14 in The Red Tornado is amazing, as for the blast final part.

Second album by Horse The Band and the sound is better than in the first opus.

The riffs at 1:16 in Manateen are beautiful, good job !

I love the crazy synths in Lord Gold Throneroom.

The Black Hole is a mix of great melodic parts.

HTB’s songs are stories with chapters : It is hard to select just a part of it.

Horse The Band is a californian band playing nintendo-core. They play a lot (85 gigs in 90 days some years ago). Their show is pure energy ! Erik Engstrom is a maniac on his synths, Nathan Winneke is clearly possessed by the devil and the other members play technical and epic songs.

Bunnies is one of their most famous song. The part at 2:01 with that great mix synth/guitar is a killer.

Stabbers Of The Knife, By Kenny Pelts‘ beginning makes me think of the band Bloodlet.

The synth and guitar parts in The Immense Defecation Of The Buntaluffigus are amazing, very Yngwie Malmsteen-ian.