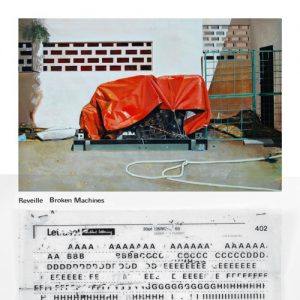 Second album by Reveille, I’ve been waiting for its release ! I think Reveille found its identity from that album, less in François Virot’s other musical projects vein.

Guillaume Ballandras join them on “Broken Machines” as a bassist.

There is four track from the 2011’s ep on that album with a much better sound, and a different production.

The album starts with Modern Pain and his great melodies. I think that song is cinematic.

We Came Alive‘s finale and chorus is absolutely amazing.

My favorite song there is Swallow Everything, the bass line is a killer, the singing rocks, and the ambiences on the guitar are great.

The part at 2:18 in Horses That Never Lose is beautiful.

Here is a music video for Revenge : http://www.youtube.com/watch?v=rVxDt0NmwBM

The artwork is amazing and it’s stunning to realize that is a painting and not a photo !

You can stream these songs for free here : http://clappingmusic.bandcamp.com/album/broken-machines

I love that noisy sound at the guitar.

You can stream these songs for free here : http://clappingmusic.bandcamp.com/album/monad-circle-scenario

You’ll find 4 of these songs in their second album.

The hypnotic rhythmic pattern in Horizon and the vocals work pretty well.

I love a lot Track 5 with just Lisa’s vocals and some guitars, bravo !

The weird ambience in Track 6 is cool.

The silk-screen print is a success.

That Ep was such a teaser for their second album !

Reveille is a french rock band with François Virot and Lisa Duroux.

If I’m correct they chose that band name in honor of Deerhoof’s album.

I bought that LP on Clapping Music’s website, it looks great.

My favorite song on that album is Mirrors : the bassline is terrific, and I love how the different instruments arrive, the harmonies, the guitar solo and that fast-tempo drum : Genius !

I like Time And Death too with Lisa singing (Great harmonies between the vocals and the guitar).

The overdubbed vocals in Little Violences is a success.

Commercial Drugs kind of sound like a Nirvana’s song.

I’m Yours sounds like a Clara Clara’s song (another project by François Virot).