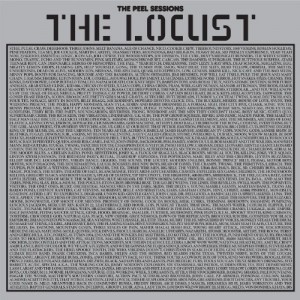 This is the last record I bought from The Locust Saga.

It’s a recording of their live performance at the famous John Peel Radio session in 2001 for BBC.

The artwork and pictures are awesome and the silvery sleeve is great.

This is the only live record by The Locust (As far as I know) and the sound is nice. It’s really interesting to listen to the beginning of their future “Plague Soundscapes” in songs like How To Become A Virgin.

It’s also really interesting that songs like Cattle Mutilation or Stucco Obelisks Labeled As Trees get a second life.

Anyway, The Locust is first and foremost a live experience, I saw them four times and I think seeing them live really helps to (try to) understand their music.

To conclude : A success as always. 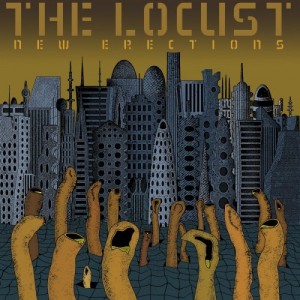 The Locust’s latest album and I hope not their last !

You have a polished and powerful production and mix done by Alex Newport. The spatialisation is a success and the mix is really clear. Each instrument is understandable, which is not always easy in this kind of music.

The main difference with the older releases is the come back of “the lower vocals” (Joey) like in their early records (Scavenger Invader).

For me, The Locust is truly a unique band, made of four virtuosi with their instruments. I mean it.

You won’t be surprised that all the songs are really complex, brutal and amazingly composed and played.

The number of layers, effects and details in their music is huge (like in God Wants Us All To Work In Factories)

I love the part at 1:05 in Full Frontal Obscurity. I remember listening to it loud and in loop mode in my car when I was still in college.

The drum parts are mind-blowing, like in Hot Tubs Full Of Brand New Fuel at 0:43 for a crazy minute or at 0:23 in We Have Reached An Official Verdict : Nobody Gives A Shit and his master acceleration on bass drum.

Tower Of Mammal‘ s keyboard parts remind me of some songs from An Albatross but more brutal.

To conclude, vocals and lyrics are still scary and funny.

This album is a success, I can’t wait for the next one ! 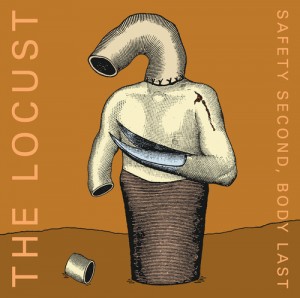 This Ep is in the same vein as “Plague Soundscapes” except there is more fine work about noise effects and ambiances.

Joey Karam built a sound cathedral with his moog equipment.

I’m amazed by the part at 1:53 in the first song, the effect research is awesome.

I love the rhythms in One Decent Leg / Immune System Overdrive at 2:14 too.
That song is the most powerful of the two. 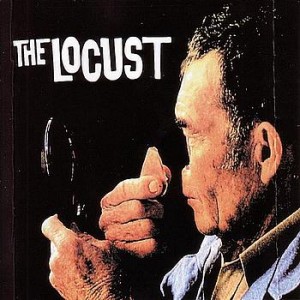 This Ep is original in its own shape : a square Mini-CD.

You have three songs with lower vocals, compared to the other releases. It reminds me of their first Ep.

The sound is a little bit messy, but you can still appreciate the gorgeous brutality of Red and Coffin Nails. 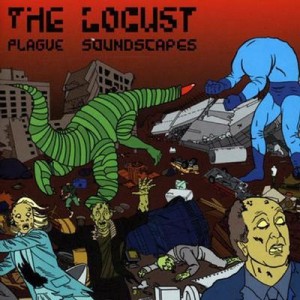 “Plague Soundscapes” is the album which turned me into a The-Locust-Hardcore-Fan. First, it’s a real turning-point in their story, because it’s the first album with a good mix and production. Alex Newport is an amazing magician who succeeded to mix the un-mixable. You can very clearly understand each instrument, and it’s awesome.

Indeed, it was really disappointing in their previous releases that you couldn’t really appreciate the quality of the drum play or Joey’s synthesizers.

It’s the first album where Gabe leaves the guitar for the drumkit and this definitely changed the band dimension : before it was crazy linear blast and now it’s much more complex and researched drum riffs.

I scream in my own band and I’m really amazed by the vocal performance of the duo Bray / Pearson. Their vocals are really powerful and high-pitched (like in Anything Jesus Does, I Can Do Better), I don’t understand how they survive their own tour.

This album is a must in terms of soundscapes and composition quality. I have been listening to it for years and I still discover some details or subtlety in some guitar or bass parts.

The song titles are still funny : Anything Jesus Does, I Can Do Better or Priest With The Sexually Transmitted Diseases, Get Out Of My Bed.

I love The Half-Eaten Sausage Would Like To See You In His Office and its amazing videoclip : http://www.youtube.com/watch?v=HCTrTPRClNM.

The drum riff in Who Wants A Dose Of The Clap ? is awesome and powerful.

The whole album is genius, It was torture for me to only choose five best songs.

Flight Of The Wounded Locust (Ep) 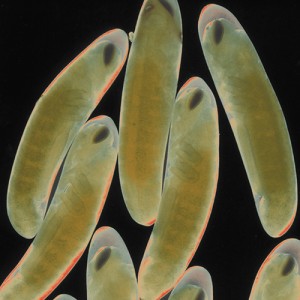 This Ep is the first with a good sound on drums. The synthesizers are really interesting (like in Get Off The Cross, The Wood Is Needed) but the guitars are still far in the mix.

This Is Radio Surgery is a song which is moving to me, I don’t really know why. There is a weird ambiance and the speed at the end of this song is amazing.

This Ep is really brutal and its finale is too (like in Wet Nurse Syndrome Hand-Me-Down Display Case).

The other songs are interesting and seem similar in their power and in the way they are played. 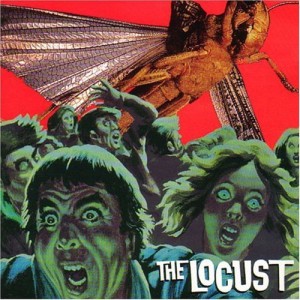 I discovered The Locust with this album by mistake (in looking for Locust Reign by Converge) around 16, 17 years old. I remember that I didn’t like it at first approach, because I was probably too narrow-minded at the time.

Later, I listened to it again and again and I started to love Moth-Eaten Deer Head and Twenty-Three Full-Time Cowboy and its awesome end “Sometimes werewolves look like little bunnies”.

Then I became a fan with “Plague Soundscapes” and I came back to this album with this awesome artwork, that a friend of mine, Boul, tatooed on his arm.

Then I started to sing Nice Tranquil Thumb In Mouth alone in my shower, and falling asleep to their soft screams at 0:12 in Stucco Obelisks Labeled As Trees.

When I wanted to play The Perils Of Believing In Round Squares at a party, I started to worry so I started playing Hardcore and Noise in my band.

You can notice that Gabe Serbian arrived first as a guitar player in this album with Joey at the keyboards. 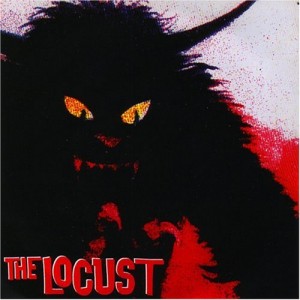 This is the first Ep (MiniCD Format) for The Locust, which I bought very recently.
The Locust is one of my favorite bands ever, Top 5 haha.

I think that every lover of original music and new soundscapes will appreciate this band.

The Locust is a quatet based in San Diego, California, but at this time, the members were : Justin Pearson (Bass, Vocals), Bobby Bray (Guitar, Vocals), James Lavalle (Keyboards) and David Astor (Drums).

Kill Roger Hedgecock and Hair Spary Suppository are for me kind of The-Locust-Official-Anthems.

I really love the guitar riffs in Pain Reliever.

I love the power at the end of Head Hits Concrete too.

This Ep is really interesting in understanding how the band has evolved.