I waited years for that record !
They didn’t disappoint me !
As soon as you played this classious white vinyl, you receive a great slap in your face, What a sound in the first Stop The End.
Skot is the only former member, but the sound of the guitars respect the past work of Christian.
About the drum pattern, you’ll find again these heavy and groovy patterns.
The sound is perfect, Perfect !
There are two songs I love equaly :
+ The Man Who Danced Himself To Death that I discovered years ago in this live video http://www.youtube.com/watch?v=rgL3eVLGDaw
+ We Killed Like Champion and its awesome halloween live : http://www.youtube.com/watch?v=I-DPcHKlhbs
Sickness & Health is really homogeneous and I love a lot all the tracks.
The part from 1:54 to 2:41 in No Room In Heaven is Grand !
I love a lot at 2:03 in When The Time Passes Slowly (Terrific Guitar Sound).
Let’s say goodbye with this great Finale : The Rescue Party.
Definitely a Must-Have.

Second Ep for the band, the songs are already released on the albums, but not recorded in the same way. I thought the versions from the first Ep brought something interesting,  It seems to me that this Ep is less powerful than the versions on “Angel’s Trumpets And Devil’s Trombones”.
For the fans. 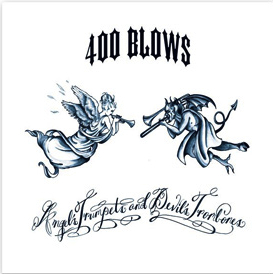 This album was mixed and masterized by the duo Alex Newport and Alan Douches (The same as for The Locust) and many songs are awesome like The Average Guy.
I really love their guitar sound and this big build-up : The Secret Life.
The Beauty Of Internal Darkness offer us this constant switch in between crunchy and saturate sound which is simple but terrific.
You have this primary energy which makes you jump everywhere and break everything like in Electric Wilderness.
Skott’s performance is as ever great and I love is intro in The World Was Yours.

Can’t wait for the next one !

First Ep for 400 Blows and even if these songs are already released on their albums, they are recorded in a different and interesting way. The sound is good and particullary the vocals on The Thumb Sole.
I really love the energy too in the play on The Biggest Hit Yet.
Very Good. 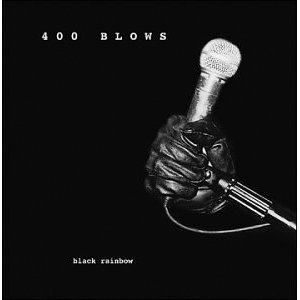 400 Blows is a very powerful trio from california.
There is vocals / drum and a guitar with its own sound, kind of bass at the same time.

First of all Black Rainbow has a huge production.

I’ll always remember the first time I listened to The Bull That Killed The Matador. Skott’s vocals are very surprising and this “double effect” is a success.

This is exactly the song which makes you destroy your own house at each listening, and that’s what we did at our flat warming in Clichy.

You’ll find this same energy in The Shipwrecked Sailor or at 2:58 in A Man Of Many Words.

I love the way Christian switch from a palm mute playing to a loud distorsion like in The Root Of Our Nature.

Ferdinand’s riffs are awesome too.

The part at 2:51 in Thinking Of You is really moving :

“You can watch as my skin’s turning blue, so painful yet so good, I’ve always understood ’til now”

400 Blows got too an interesting presence : http://www.youtube.com/watch?v=kMO_aOsXydQ, I can’t wait to see them live.

I love this whole album, a Must-Have (Evenif it was hard to buy a copy here).

First album for 400 Blows. You’ll find on it many songs which will be re-recorded on the next albums.

I discovered it really recently and as the sound is a little bit under the level of the two albums, it’s a little bit hard to be into it.

However, I really love the vocal work on the two exclusive songs And The City Never Slept and The Flies.

I love to listen to these versions of The World’s Largest Miniature and The Bull That Kill The Matador which are slower than the recent ones but heavier and more violent, maybe because of the cymbals which are more frontal in the mix.